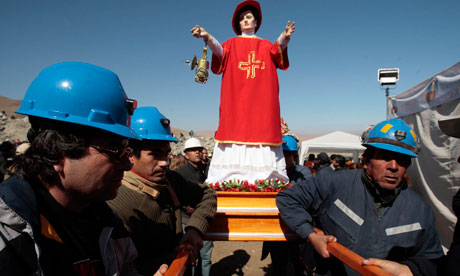 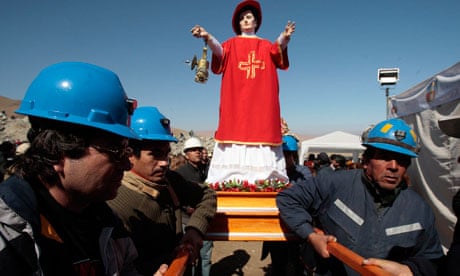 That was the question asked this morning, concerning the Chile mine disaster, on the BBC’s discussion program as I was having my coffee. There was the usual split of course between “it was God” and “of course it wasn’t – it was just technical ability.”
There was some lip-service given to the idea of faith but the split between science and religion still rages strongly – no surprise there. However everyone did agree that it was a good news story that we could use more of.
Having an astrological background, I tend to look at things differently.  Astrologers are often accused of looking at charts after the event – “what’s the use of that?” they say – “if you’d known the mine was going to collapse then that would have been more useful.” Apart from the fact that we would have to look at every chart for every moment for every small town, prediction for me doesn’t work that way.  It has to do with consciousness. We react to everything from what we know and believe. So unless we know what everyone believes and knows, it would be impossible for me to predict the mine collapse – although other astrologers might not agree.

The strength of astrology can be to look at an event and make some sense of it.  What can we learn from the Chile mine disaster that captured the attention of the entire world? This fact alone makes it worthy of study. Time, to me, has a sort of consciousness – “there is a time for every purpose” kind of idea. Astrology would agree with that. So here’s what I take from Chile using only two planets.

One is Pluto in Capricorn. Pluto is the God of the underworld who obviously has a connection to mines. What is on his mind in Capricorn is structures, building, hard work and epecially responsibilty.  Planning and meeting deadlines and meeting agreements. What we saw here was all of this.  The leader of the miners had qualities that any leader would be proud of.  He used discipline in the beginning, he took responsibility, he set up a structure and he didn’t blame everyone else and be greedy and look after himself. He was last out of the mine and saw that as an honour. Rules helped keep the miners in good shape. The bankers could learn a lot from Luis Urzua. 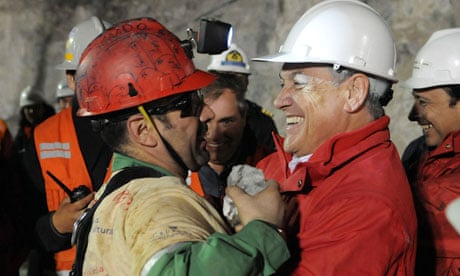 The leader of the country, Sebastian Pinera (shown here with Florencio Avelos  – photo guardian.co.uk) also took his responsibilities seriously.  He didn’t miss the opportunity to be in the limelight of course, but I think he genuinely means it when he says (and this is maybe one of the lessons) “no miner will go down an unsafe mine again”. I hope he means it as the world is watching and he will be held to account if he breaks that promise. The world is also now watching China because of this event. Consciousness as to what is happening to miners has been raised. What was nice about this story is there wasn’t an outburst of “Who can we blame?” The question was asked but not in that way – all the teams got on with the matter at hand in a slow, responsible and careful way. They asked for, and got, expertise from other countries and the result is clear for all to see.

One of the other players sidling up to Pluto at the moment is the dwarf planet Ceres. In the mythology she is Pluto’s mother-in law (apart from being his sister). She has a completely different agenda from Pluto and fights him all the way. One of her missions is, I think, to take on the ravaging of the earth. Most of the things from under the ground are used to gain power. Think of gold, uranium, coal and of course oil. Many have been killed in pursuit of these things and the earth has the scars to prove it. Ceres, in the myth, can make weather happen.  She can cause natural disasters to make a point. I don’t know that she minds mining as such but I think she is saying that it has gone way too far now. She is taking Pluto on.  She is saying “if you carry on exploiting the earth and the people I will act”. The lesson here again I think is how responsibly we use power. There needs to be a compromise as there was in the myth. Ceres’ compromise was to create summer when her daughter was above ground and everything flourished, and she created winter when her daughter was under the ground with Pluto. Is mining really necessary all year round and for all these products? Is everyone benefiting from them and is the earth being looked after? Are we giving anything back? Together with Pluto in Capricorn, responsibility for the earth and from any leaders is the key here.

And what about the question? Was it a miracle? It depends what that means but what could be contemplated here is that it was not God and not science but both.  This event shows that they work together. Many experiments have shown that prayer does have an effect.  The mining community certainly have faith and that cannot fail to have had an influence. But that doesn’t mean that science didn’t play a role. How wonderful was the scientific knowledge in this project? This is what we can learn too science and faith can cooperate. Maybe this is one reason why this event captured the imagination of the world.

And while I’m on belief… Why does everyone think that the miners will have trouble with all sorts of things later?  The world is almost insisting that they will suffer from Post Traumatic Stress Disorder or other huge problems. Why can’t the focus be on letting them be just fine? Research has proved that our thoughts have a huge effect! I wish them a normal happy life!