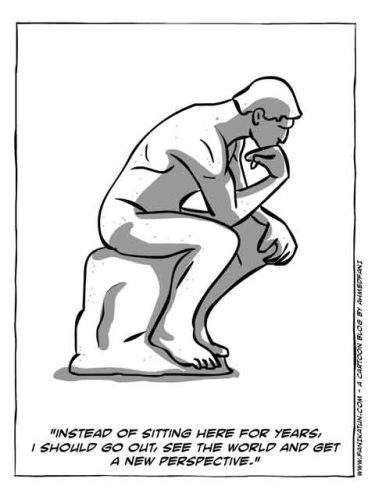 As you probably know by now, the planet Mercury, which is associated with our sign of the month, Gemini, looks as though it is backing up a few times a year. Many astrologers, including me, have  written about this and what it might or might not mean.

I like the idea of planets looking inwards while being retrograde, rather than outwards towards the world. That way we don’t need to have negative connotations for these retrograde movements. After all, everything is good for something.

So as Mercury, which is about communication and how we think, is in this state at the moment (from 7th June until 2nd July) we have the opportunity to look inwards again – at our own thoughts. 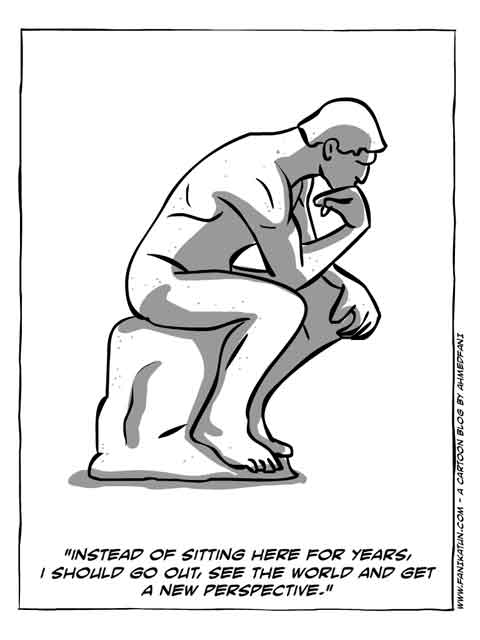 Cartoon from www.fanikatun.com – what the thinker should think.

But first a closer look at this small, quick planet. As the one closest to our sun, Mercury doesn’t take long to do a circuit of the sun – only about 88 days. From the earth it seems longer, as he dances back and forth and takes about a year to go through the backdrop of all the zodiac signs. The symbolism suggests that Gemini’s are quick-thinking and bright, and they can change their minds often! Mercury is quicksilver. He is also known as a trickster.

Ah – the stories we could tell
Since Mercury represents the thinking function for all of us, you might imagine that this would mean that it should be easy for us to alter our thinking. After all, thoughts come and go all the time. But this clearly isn’t the case. How often can our good friends anticipate what we are going to think or say about a particular issue? We tend to get stuck in our own life stories and tell them the same way all the time. Or we whinge about the same things (such as husbands, wives, bosses or co-workers, the state of the world…) ad nauseam. Or we have a rant about the issues that upset us, which feels great – there is nothing like a good rant is there? However it only makes us feel better for a minute but really, it just reinforces where we are stuck. And we end up believing our own stories!

Thinking in Crisis
But are these stories we tell ourselves right? I was listening to a podcast from Gregg Braden recently. It was an interview about his new book ‘The Turning Point: Creating Resilience in a Time of Extremes’. He suggests that the world’s problem is a crisis in thinking. I think he’s right! It amazes me what some people think and believe, or whether they think at all! But back to Gregg. What is necessary, according to him, is that we need to mourn the past. We will never get back to the way things were, much as we may long for that, so we need to acknowledge the loss of a past we might be yearning for, to create room for the new. He suggests that the brain needs to communicate with the heart, so we can truly mourn what has gone. Science is confirming that a positive feeling in the heart gives more resilience in life, not to mention better health. 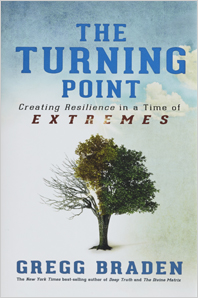 What better time to investigate what we are thinking and to see if it’s helpful? Particularly since Mercury is in Gemini as I write. So Mercury (thinking) about thoughts (Gemini!)

But how to do this? The horoscope of a person or a company is a snapshot of the planetary positions at the time of birth or founding. This means that Mercury is set in a particular position, which astrologers interpret as a way of thinking. We can’t really change the way we think, or our preferred broad topics of contemplation or interest. However, through awareness, we can change what we think about and where we focus our attention.

Mind matters!
I am currently reading a very interesting book by Dr. David Hamilton, called ‘How Your Mind can Heal Your Body’. David used to work in the pharmaceutical industry as a specialist in biological and medicinal chemistry. He became fascinated by the placebo effect, which I have written about earlier, and has gone on to study mind-body connections in much more depth. It is now well-known that the brain has plasticity, i.e. it can rewire itself and does so often. Especially as we learn new things. It has been suggested that a cure for dementia would be to learn a new language (as an adult). The ‘use it or lose it’ principle is correct according to David. He is an advocate of doing puzzles and sudoku and, in particular, having new experiences to keep the brain flexible and in good working order. His main method of healing is visualisation. He also suggests the exercise of stopping complaining for 21 days combined with practising gratitude, as 21 days seems to be the time it takes to rewire new neural networks, which science seems now to be proving can lead to actual DNA changes.

So what we think about matters a lot! 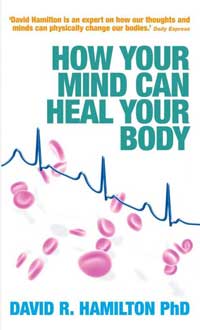 What will we think?
Although we all have our particular interests, and companies have their pet topics of conversation, we can also tune in to the world’s thoughts as Mercury goes through the signs. Hence my suggestion to think about thinking while Mercury is in Gemini. In July he will be in Cancer again; he dipped his toe in there at the end of May before he went backwards and entered Gemini again this month. Cancer, an emotional water sign, has wide symbolism as do all the signs, but some of the topics to consider, starting July 13th until the end of July, are: family, your sense of belonging, and how you fit into your groups. And speaking of feelings and country groups and patriotism… The Dutch Van Persie scoring a goal in the world cup. I love the way we now have a new word – vanpersieing! It has become a true internet meme – Mercury having fun! My favourite is probably from Twitter – I can’t find the creator – so to speak! (Both photos.) It was a difficult choice – see the know your meme site for more vanpersieing.

So some questions…
Apart from the inevitable conversations about the World Cup, what are you thinking and talking about? What are the repeated topics – both personally and at your workplace? Are you getting stuck on things that can’t be changed? How about stopping complaining for 21 days to see how you feel!

Right – off to do the daily sudoku! And then learn a new language… Not sure I’m ready to give up ranting at the TV yet though. These are many and varied and a bit longer than normal but all pretty interesting if this topic touches you.

Dr. David Hamilton’s Ted talk on ‘Why Kindness is Good for You’ (around 16 mins.) He also has some interesting research about stress on his blog.

The video interview of Gregg Braden’s new book (about an hour).

And another one of my favourites Richard Moss on ‘Who you are Begins Now‘ (7 mins.)

With Mercury being invoked, there are always too many interesting things. Joe Dispenza is also worthy of a google! Oh dear – just realised they are all men including my quote. They all have nice accents though!

“To think is to practice brain chemistry” Deepak Chopra.