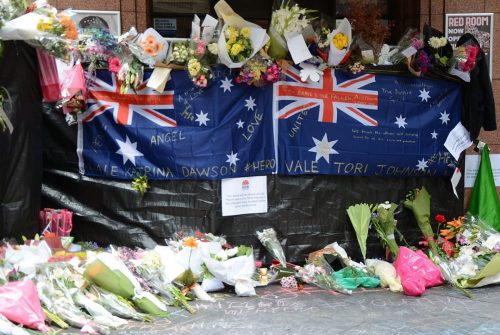 As this is the Sagittarius Monthly Planet, I was intending to write about Saturn entering this sign on December 23rd, where he will stay for a few years. But events somewhat overtook me. Since 2012 and possibly even earlier, astrologers have been commenting on an unfolding celestial drama involving the clash of two gods – Uranus, the sky god, and Pluto, the god of the underworld. As I have mentioned in previous posts, these two meet at a 90 degree angle in the sky seven times between 2012 and 2015, which means a very long period of turbulence – unusually long. So this is a special time.

On 15th December, they clashed for the sixth time. Right on cue, the very sad story of the Sydney hostages gripped the world. And the next day the tragic story of the murdered children in Peshawar unfolded. My heart goes out to all involved. How truly frightening both of these events must have been. I can’t imagine the grief that their families must be feeling.

Floral tributes for the victims of the Sydney siege.

But I am an astrologer…

… so I watch these events in order to learn how patterns work. I have been to Martin Place in Sydney and I could imagine popping in to a cafe such as Lindt for a morning coffee, so this event is somehow close to me. I watched the live feed so I could see what the sky was doing, and although the attack was horrific, the timing was fascinating to watch.

Although times given on websites vary, the event seems to have started when the planet Mars – the manly god of war, aggression and fighting – had just risen above the horizon. This is a powerful place in the sky. The moment puts Mars energy in the spotlight at this location. A moment that required some action. It suggests that the motivation for this terrible deed could be anger. 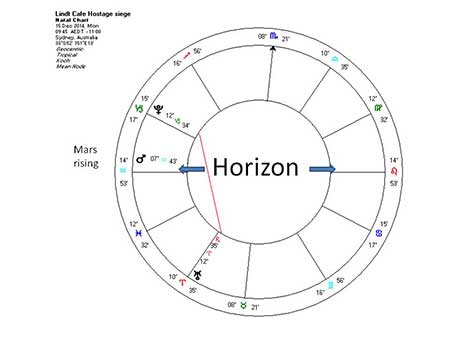 Mars was close to the horizon when the siege started at around 9:45 am in Sydney.

The siege lasted for a long time, so the sky changed over that period. On average, the horizon moves one degree every four minutes. When Aquarius, the sign of freedom, reached an overhead position with Mars tagging along, some of the men escaped the cafe. Again, men and action are highlighted – and a planet directly overhead is a position that suggests visibility to the world. There were other interesting moments from the point of view of the position reached by other planets during the siege, but of course there is no minute-by-minute description of what was happening inside the cafe. 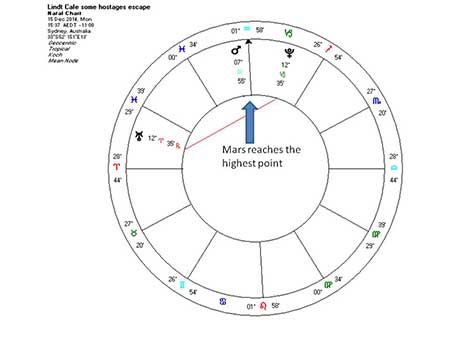 Mars was approaching the highest point in the sky in the sign of freedom – Aquarius – as men escaped – the first an 82-year-old, John O’Brien, who spotted a big green button! 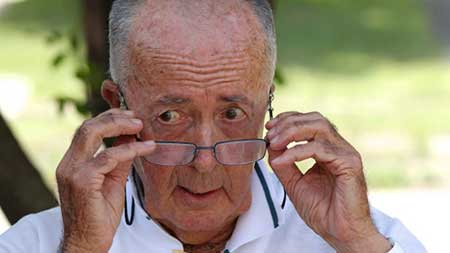 Stories in the forms of myths and fables have long been used to try to make sense of life. Astrology uses symbols to do the same thing. In this drama, as well as highlighting aggression, Mars is also visible in the incredible courage of the café manager, Tori Johnson, who lost his life attempting to take the weapon from the perpetrator, Man Haron Monis. The other hostage who died, showed the protective side that Mars can have. It is thought that Katrina Dawson was protecting her pregnant friend Julie Taylor and it seems she was killed in the crossfire that ensued when the police moved in, although reports vary.

But I think the real culprits in this sky story are still Uranus and Pluto. The world has not listened to the changes they are asking for, so again, as with their previous meetings, it seems they want to make a point. But what is it?

The story of Sydney has all the symbolism of this sky clash. We have the perpetrator – very Uranian. He was alone, an outsider, possibly unstable. He was convinced he was in the right. Now that he is dead we will never know his motivation, but it seems he was under the impression that the government was victimising him. He was on bail, having being accused of murdering his wife. He had been convicted of sending offensive letters to the families of soldiers who had died in Afghanistan. The siege had all the hallmarks of tactics that are advocated on terrorist websites. “Do these things alone, make them unexpected, use ordinary people and create maximum impact.” In this sense it was similar to the cold-blooded murder of Lee Rigby in London. Uranus wants freedom, and perhaps Monis was angry that he might end up in prison. When Uranus goes too far, rebelliousness can make people unhinged. But although the police knew all about him, he was no longer on a watch list. Being different is not a reason to lock people up! 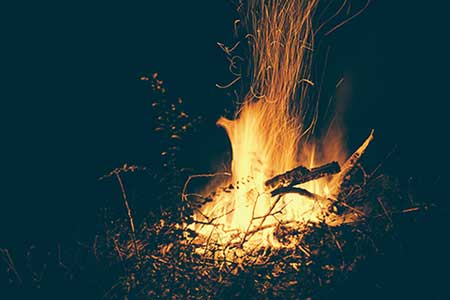 Sparks tend to fly when Uranus and Pluto meet

On the other side we have the police force, Pluto, who has to be in control. He has to investigate and do research and get to the bottom of things – the detective. The Australian police have been very focussed on terrorism – they were on high alert. The police know they are powerless to prevent this type of attack, so they can only do their best with the information they have. But they had been well trained to respond to incidents like this, due to measures taken for the Sydney Olympics. When Pluto was underfoot in Sydney, i.e. the opposite of overhead, gunfire was heard and the police made the do-or-die decision to go in and take control. The moment asked for powerful, black and white action on the ground, invisible to the world – inside the café. 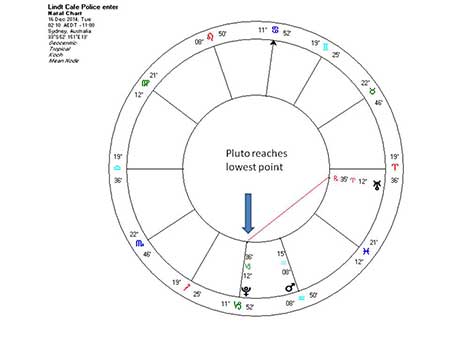 At 2:10 am in Sydney after two loud bangs were heard police stormed the building. Pluto is at the lowest point at 2:13. Many had attempted to escape before this, possibly when Uranus was on the horizon. The Uranus-Pluto conflict is brought into sharp focus around this time.

Uranus wants freedom and change and, being in the sign of Aries, is prepared to fight for it. Monis was doing what he believed to be the right thing for himself, although in a destructive way. The world is learning how to be brave and change things, but the lesson is for it not to be destructive to others. Australia, by being one of the first countries to greet the dawn each day, maybe has a leading role to play in awakening our awareness concerning these themes. The moral of this siege is perhaps that when done this way, change is counter-productive. Man Haron Maris came to a violent end.

Pluto is also tricky for the world to get a handle on. We have only known about him since 1930, so he is young to us; we are still learning how to use him. Capricorn, where Pluto is now, is a sign that is associated with rules and doing the right thing. The police must have suspected that Monis should have been locked up. Has the system become too politically correct? Many in the police must feel powerless in these situations. They are stuck with having to be careful about racism, yet they know that some people should not be on the loose. How to balance this is a worldwide problem. Pluto requires power, but it needs to be used wisely and responsibly. It sounds as if the police tried to do this at the scene – after they had reached the conclusion that negotiation was not going to work. Decisive action was probably the right decision, but with Pluto comes life and death struggles. And terror. How powerless would any of us be, faced with this situation? The hostage-taker was not to be reasoned with, as is the case with many who are in a position of power. We have to find new tools with which to bargain. That is the moral of this story.

But there is still a question in my mind. Capricorn is also a sign of fear. By focussing so much on the inevitability of terror attacks, did Australia (and do other countries) somehow invoke an attack like this? Science is proving that what we focus on – through either fear or by using positive intention – can affect outcomes.

The Peshawar story of the tragic deaths of many children also shows these two conflicting elements. Old power trying to hold back change, particularly in the education of girls, and taking revenge. Moving further west, however, there has been more positive use of these two gods. The Church of England has a woman bishop, finally! Symbolically this is really important for the world. Change (Uranus) of who holds power (Pluto) has been accomplished. And perhaps more significantly, the US and Cuba have made up. As President Obama said, they have not been on speaking terms since before he was born! It’s another positive change in terms of control. The time is right. Libby Lane –  who made history as the first woman bishop of the Church of England – love the shoes!

Let’s hope the last encounter of these two gods in March 2015 will swing the balance in favour of positive change. Brave innovation and responsible power is the way to go. The more of us that can do this, the more likely we are to reach a tipping point so that we can make the most of these valuable, powerful times. What will be your contribution?

An interesting article on stories

The story of John and the big green button

And this time also a book: Scilla Elworthy’s ‘ Pioneering the Possible – Awakened Leadership for a World that Works’. Although this book is about leadership, Scilla says: “If we want to communicate clearly, transform conflicts, generate energy and develop trust in our teams, our first challenge is to do the inner work. This is the current evolutionary process that most people can’t see: namely that the desired outer changes cannot come about without the inner change. The quality of your awareness directly affects the quality of the results you produce. This book demonstrates how anyone can develop this inner power to build their own personal contribution to the future, and become a 21st century pioneer of what’s possible.”

“Stories can conquer fear, you know. They can make the heart bigger.” Ben Okri, Author.