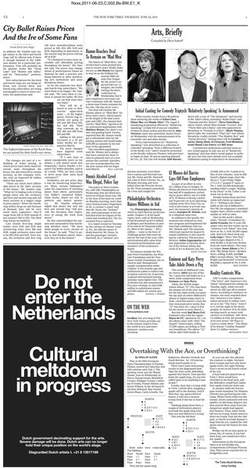 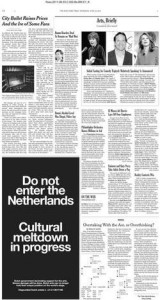 This week this advertisement appeared in the NY Times. It is a response to proposed government cuts on subsidies for Culture in the Netherlands. It had the desired effect… much outrage. On top of this, at the moment and all at the same time, three major museums are fully or partly closed  in Amsterdam.

As an astrologer I can’t keep my hands off a chart when something like this happens. “What is going on in the Netherlands chart”,  I asked myself –  always nice to have someone who might provide some sort of answer.

I thought Venus – the boss of culture and art and all things beautiful – might be the culprit and indeed she is being put on the rack by Saturn – that hard task master who wants us to be responsible and take the economic mess (also Venus) seriously.
And he’s not finished with her yet.

In The Dutch chart, Saturn’s first assignation with her was on November the 26th 2010. Saturn is in Libra at the moment so he has his sights on cleaning up general Libra topics globally, which include art and culture and also relationships and negotiations. Not to mention money. He likes some structure and he likes contracts or agreements in relationships. And responsible spending. It’s all about taking responsibility for these things.

For the Netherlands though, he is also in direct opposition to Venus, the planet, which apart from art and culture, also rules norms and values and what we enjoy. So this period is of course about more than just Culture with a big C.

Venus in the Dutch chart is in Aries, so there is a love of pioneering, challenging, competing, haggling, and going for it when it comes to money. For a small country there has been a good deal of daring exploration in the past, those brave adventurers coming back as conquering heroes. There is also a love of doing things on the spur of the moment, a kind of bravery but perhaps not always with consideration of the possible consequences. Saturn is questioning that. Saturn restricts to give you time to think.

So let’s look at the dates to see if we can get some insight and advice. The first date of November 26th last year, resulted in tickets for concerts for 2011 going on sale early, due to the fact that Government had introduced sales tax on these tickets. The early sales avoided this cost, with the resulting loss to Government coffers.

Saturn contacts Venus three times, so this whole period describes a process with high points. The 26th of November was the first and the second was 30th March this year. What was announced then, was that Government would play a smaller role in Culture. (Article in Dutch) For the first time there was a group set up known as the “Table of Six”, which represents the whole art world. They reached agreement at this date to present a proposal to Government with a new vision for financing Culture in the Netherlands, which involves a better balance between the market and other financiers. They are against the radical cuts which are proposed.

There is one more meeting to go between Saturn and Venus on 22nd August this year. The struggles continue. Yesterday in the Hague there were more clashes during another demonstration. Artists are accusing the police of being much too heavy handed and aggressive – out of proportion with the events.

So what should Holland be doing and learning?

The second date gives some hope for a good outcome after August. What is needed is a structure and some new clear rules. Artists must take responsibility for the money they receive – so they need to make business-like proposals when Saturn is around. Delivery of Culture should fit in with market needs but also art lovers need to be prepared to pay a reasonable fee for what they love. For example a lot of music is downloaded for free which doesn’t really show appreciation for artists. Everyone has to live within their means at the moment. There is a restructuring necessary. For a small country there were a lot of subsidies which probably could be better focused.

On a personal level we need to take the things we love seriously. Whether that is art or people let’s take responsibility and pay for these things with our money and/or our time.