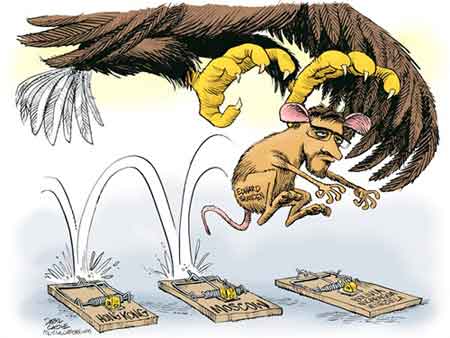 We are in the Cancer time of year again – the start of summer in Northern climes, and indeed it is summer here at last. Cancer is a sign that represents the home. Where we fit. Where we are included in something and are a part of something – not necessarily our real family. Some of those can be a nightmare! We have had the patriotic days of 4th of July in the US – a very Cancerian land – and Bastille Day in France. Patriotism is another Cancer theme I have written about previously in the Cancer 2008 post. 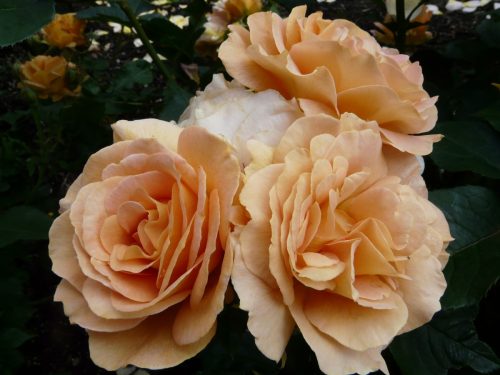 A symbol of summer – one of mine.

But we also have Edward Snowden. Homeless in Sheremetyevo, Moscow’s airport.

Where does he fit? Who will take him in? And how does he get there?

Wherever I lay my hat…

Having lived in a country or two, I know how the word ‘home’ can get complicated. When I talk of going home, I can mean my house, here in Amsterdam, but I also used it last year when I went ‘home’ to New Zealand. With more and more people and especially children (another Cancer topic) moving around in a global economy, I think people are becoming rootless. New Zealand will always be home to me, but that is partly because I lived there for many years before I left. Many of my clients have never even visited their land of birth since leaving it as very young children. Home is becoming a different concept for many. So how can we be true to a group if we don’t have one?

So what about Edward?

Is wherever he lays his hat his home – as the Marvin Gaye (originally) song goes? Come to think of it I’ve never seen him in a hat, (Ed, not Marvin) but he might need one in the future to be incognito, which he likes. Perhaps this one that you can buy (every story can make money!!). 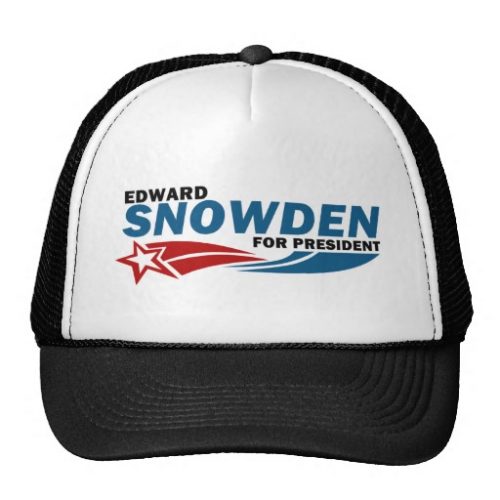 Astrologers, as always when birth times are published, were very excited when Snowden’s birth data appeared on the net. It doesn’t take much to get us going! His birth home is Elizabeth City in North Carolina, USA. But he is one of the growing group of what are sometimes called ‘global nomads’. He has lived and worked in several countries and speaks some interesting languages, such as Japanese and a smattering of Mandarin. Global nomads appear to have only loose connections to their land of birth. Perhaps it is easier to be ‘unpatriotic’ because of this. He is protecting (Cancer theme again) a larger global group, as he sees it. Global nomads are known to be better at fitting into many cultures. But where is Ed at home?

Does his chart have the answers?

Well of course I would say yes! He celebrated his thirtieth birthday in the middle of all the leak fuss, on the 21st June – a date often seen as the start of Cancer. But in fact, as the start of the Cancer period changes each year, he is a very late Gemini, hence his interest in languages, communication and spreading information. The Moon in a chart can describe where we feel at home – his is in Scorpio. He is at home in espionage, the underworld, in hiding, away from the public glare. Uncovering secrets. The job at the CIA suited him well as a work environment. He is a private individual but… his dilemma is that he believes in speaking out and speaking the truth. In my opinion he sees it as his mission to take on power and corruption. But he has a problem. How does he hide in his Scorpio cave where he feels safe, and still fulfil his mission? 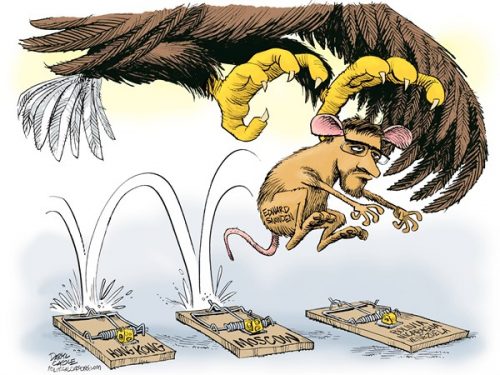 Cartoon by Daryl Cagel at Cagle.com

As a clever Gemini, Ed is good at negotiation and communication, so he has offers of asylum. They are all from what might be seen as Scorpio type countries. Nicaragua, Venezuela and Bolivia are not really noted for their transparency of government! And as I write, he is seeking temporary asylum in Russia, a country that definitely has a shady Scorpio nature by reputation. All good homes for him in a way, however I would dare to venture that Venezuela is the best for getting his message across – although it will be hard to be invisible anywhere in Latin America. Hong Kong was a really good place for that.

We need to talk about Jupiter

Snowden’s birthday was on June 21st as I mentioned. What was interesting astrologically is that on that day this year, the Sun went into Cancer and a couple of days after Snowden arrived homeless in Russia, Jupiter entered the sign of Cancer as well (on June 26th GMT). It will stay there for about a year. So Jupiter – what we believe in, our philosophy of life, our strategy – is highlighting Cancer themes for the coming year. And true to form, they are coming to light in droves.

I want to talk about three of them. Astrology is a great tool for linking what might appear to be disparate things. Snowden, the Trayvon Martin case and the row about vaccination against measles, which has broken out here in the Netherlands, are all linked by this Jupiter in Cancer theme. What is our philosophy about how we protect the world (Snowden), our communities (Martin – Zimmerman case) and our kids and communities (measles)? 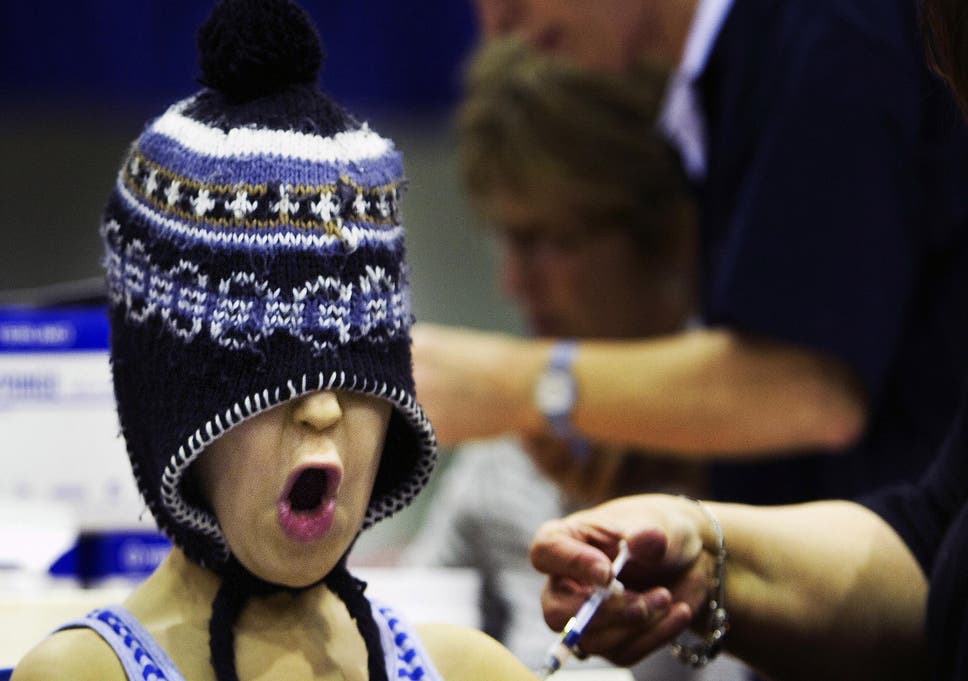 Photo in the Independent from Robin Utrecht

All of these are about what we believe, which according to many spiritual teachings, is a fundamental issue for how our lives turn out. Both the Snowden case and the verdict in the Zimmerman case recently, which acquitted Zimmerman of the murder of an unarmed young black man (Martin), have raised heated discussions about belief systems and norms and values in the US. Interestingly the US chart also has Jupiter in the sign of Cancer, so the need to bear arms to protect home, family and neighbourhoods are a given for many. Because of this, Zimmerman was acquitted. Protection of what is ‘ours’ is paramount. And whatever is said, a young black man didn’t ‘fit’ where he was. He was not one of ‘ours’, not part of the family. Below is a link to a video that highlights this issue very well.

The right man for the job?

In many parts of the US, Snowden is seen as being incredibly unpatriotic. There is a kind of belief that anything the government does to ‘protect’ her people is justified. America has even convinced other countries to sign up to this. Jupiter can be arrogant. But the time has arrived to question that right and Snowden is the man to do it. His Jupiter is next to whistle-blowing Uranus. The truth will out. Wake up people! In the sign of Sagittarius, he knows his vision is right for the world.

Jupiter in mythology was the top God. In a chart he can show where we like to play God. He is associated with religion – i.e. the philosophy by which we try to live. But there is a lot of posturing going on here in the Netherlands over the measles epidemic. I know it is possible to die from measles, but when I was a kid we were expected to get them. Even then it was known that you build up an immunity to this disease by having had it. Vaccines are based on this principle.

Religious groups who don’t agree with vaccinations are experiencing more cases of measles. This has caused many people to find arguments to convince these groups to get their children vaccinated – at an even earlier age than normal. There is a conflict between the right to protect your child in your own way and protecting the wider community. Some of the arguments are ridiculous. As if these communities have never struggled with this dilemma! The tone is ‘of course you need to vaccinate children – science (a religion?) knows best!’ Does it? If so, why can’t scientists cure measles? 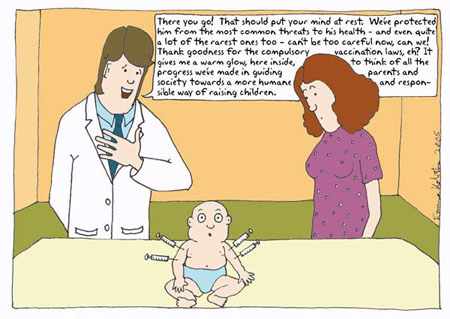 Lots of wonderful cartoons from Emma Holister at emmaholister.blogspot.nl

Studies I have read show that some diseases return, even in people who have had vaccinations, at the same rate as others. It is a bit arrogant to think that if we can evolve and change genes to suit environments, that bacteria and viruses can’t and don’t do the same. Science knows that they do – look at the resistance that insects have developed to Monsanto products. Many people are questioning vaccinations on these grounds, and the fact that there is growing evidence of vaccines causing problems. Yet most people don’t question the assumption that everyone should be vaccinated – again it is a given. Religious communities are bearing the brunt and being called irresponsible, even though many other people are also against vaccinations. However, it is good that the question is being raised yet again.

What’s it really about?

So the basic issue is that of sticking to your own philosophy. We all have blind spots here. What do you believe in? If we want to move forward with difficult philosophical issues, we need to really question our beliefs. Why do we believe what we believe – about vaccines, guns, Trayvon Martin and anything else? Religious wars are being fought for less! But we need to belong – to have a home – and unfortunately it is difficult going against your home or country culture. If we do we are outcasts. 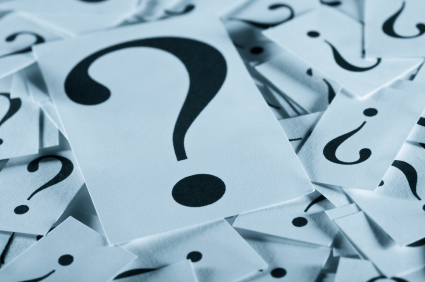 So our only option is to do the opposite of Jupiter’s sign (he is ruled by Sagittarius) and that is Gemini. Yes, what Edward Snowden is doing is raising that all-important Gemini phenomenon – questions! Maybe you can do this too – about your own beliefs. Many life philosophies are based on fear or just unconsciously adopted from your culture. Are yours?

Another of Nic Askew’s wonderful very short videos on the same theme
Is it true?

“Nothing is so firmly believed as what we least know.”
Michel Eyquem de Montaigne, French Author, 1533 – 1592.

2. Ed has a grand trine – Sun, Pluto and Ceres which is near the MC. I see Ceres, based on her mythology, as a good negotiator who dares to take on Jupiter and Pluto. So to me, Ed’s mission and vocation include her themes. He is trying to follow his calling by using information (Gemini).

3. Looking at relocation charts, Mercury is rising in the capital of Venezuela. In Hong Kong he has the Moon in the 12th House – a good place to go underground.