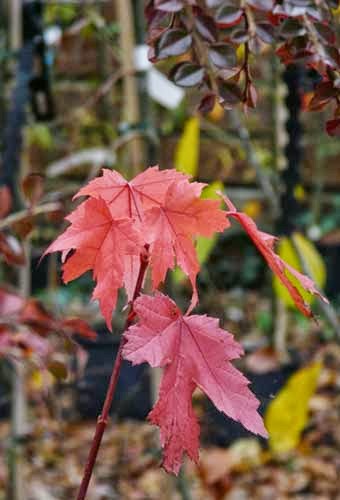 The root of the word compromise comes from com – together and promittere – promise. So a joint promise. It sounds like marriage! All very Libran – our sign of the month. Lovely! The start of Libra is the time that represents one of the balance points of the year, when the sun crosses the equator. There is a sense of equality – the word equator comes from the same root – when day and night are equal – dark and light are in balance. 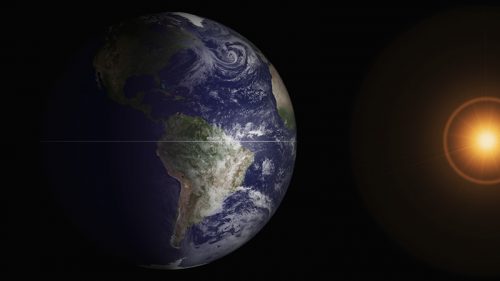 So Libra is often associated with peace, which makes it a good time to announce the Nobel Peace prize, which I wrote about last year. Perhaps it is a good time to settle an argument too.

In the northern hemisphere, it is the beginning of Autumn. The days become shorter until near the year-end when the sun turns back towards the equator. Every year, preparations for Christmas and other year-end festivities seem to start earlier. Already, here in Amsterdam, we have Christmas cake and plum puddings in Marks & Spencer, even though most Dutch people I know hate Christmas pudding! 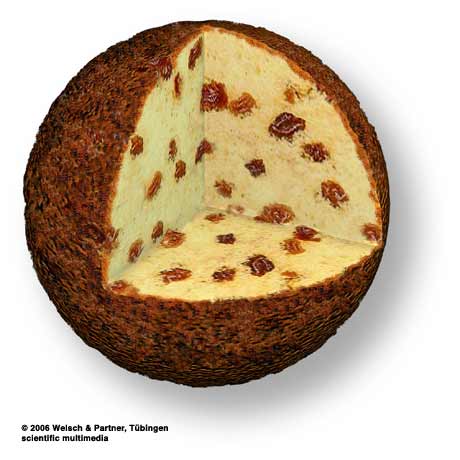 A take on the ‘plum pudding’ model of an atom – a standard model pre Rutherford. Photo on several websites.

Knight on a white horse?
It’s also the time of year here in the Netherlands when Sinterklaas is on the agenda. That’s one of the end of year festivities that has a lot in common with Santa Claus or Father Christmas. It is celebrated on the eve of Saint Nicholas’s day – December 5th. A carrot in a shoe for the Sint’s horse and rewards in the form of poems and gifts for good deeds during the year, especially for well-behaved children, are the order of the day. The Sint rides a white horse (no reindeer!) and has a book which lists whether children have been naughty or good. In the Netherlands, the poems make fun of the annoying characteristics of friends and family. 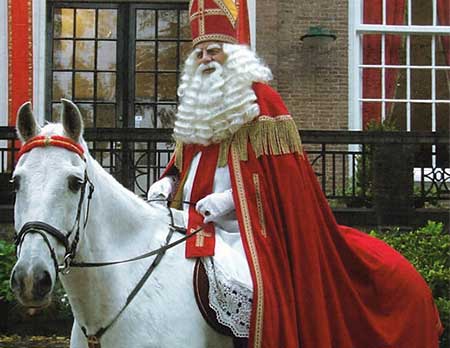 The Sint on Amerigo – photo from http://dordrechtzwartepieten.nl

But all is not well in Sinterklaas land. For a few years now there have been rumblings about racism, because of Sint’s helpers – the Black Piets. And so we get the shadow side of Libra showing his sword – Aries – who defends his position. The two sides are entangled in such a row that the government has had to intervene. Each side has a strong lobby – one side saying: “It is tradition, we are entitled to it and it is not racist, it is our right to keep the traditions that we have had for years, and Piet is black because he goes down chimneys – there is no harm intended.”

On the other side we have the lobby that insists that having Negro-like Piets as helpers for a white Sint is very racist, harks back to the slave trade, and is offensive and degrading to people of colour. 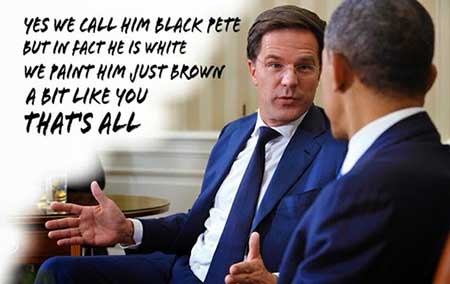 Satire – Mark Rutte, the Dutch PM with Obama from (I think) www.ulftingenwest.nl

What do I know?
I think by not being Dutch, I have sympathy with both sides. I can see that some are clearly offended by it – although not being black, I can’t really know how this feels. I must admit when I first encountered Sinterklaas, the black-white thing never even remotely registered with me. It seemed like a fun festival that the kids loved and I was too busy to notice, as I was trying to understand how the presents, called surprises, were supposed to be given. (I suspect like many others – and much hilarity ensued from these discussions!) Perhaps my being sheltered from forms of hierarchy when I was growing up, including human dominion over animals, explains the basis for my lack of awareness around a possible problem. New Zealand is a Libran country! Not that racism doesn’t exist there – it’s just that I wasn’t really exposed to it – although my mother did have a bit of judgement about Maoris due to a real experience. When she was a child, a few Maori children used to spit plum stones into the brim of her hat while she was at church! (Pity I don’t have a picture of this as I found it rather amusing.) It is a small example of judging a whole section of society based on one small part of the group. But my mother wasn’t really racist and judgement is a topic for Saggi time.

However I also understand that the Dutch, having a strong Cancerian archetypal makeup, are fiercely patriotic, family-oriented and love traditions. 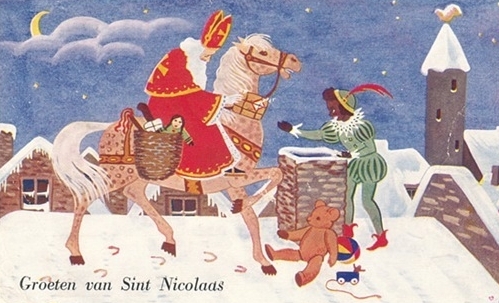 A vintage postcard for Sinterklaas

Stalemate
I feel sorry for the government having to find a compromise. On the 3rd of July this year the court ruled that Black Piet is a negative stereotype. Companies or councils that use Black Piet could be prosecuted! But as I write, an appeal is taking place about this decision. The outcome of this process is due on November 12th. The whole discussion could also go to the European court depending on the outcome, but in the meantime the show must go on, as the decision is too late for some preparations to wait.

A good thing that has come out of this conflict already is that some of the traditional Sinterklaas songs have been re-written – not only because of the racist overtones, but because the kids had no idea what some of them meant!

The compromises
Last year the main television program that gets kids excited in the lead up to Sinterklaas dropped the ‘Black’ and we had House Piet, Listening Piet, Packing Piet (the names sound better in Dutch!) – that sort of thing – describing roles. There have been suggestions for rainbow Piets, although that was thought to be even harder to explain! Perhaps, mused some, the arrival of the Sint should be cancelled. There are various solutions for the parades in different cities. Gouda (yes – the cheese place) are now proposing Cheese Piets and Waffle Piets! Amsterdam and Utrecht have dropped Piet’s gold earrings and red lips, but the Hague said – Piet is black – end of story! Albert Heijn, the big supermarket chain, have tried a middle line in supplying both Black Piet products and other options. But with all this, no-one is happy! So how do we balance Aries with Libra? Scorpio time will only make each side more fundamentalist! 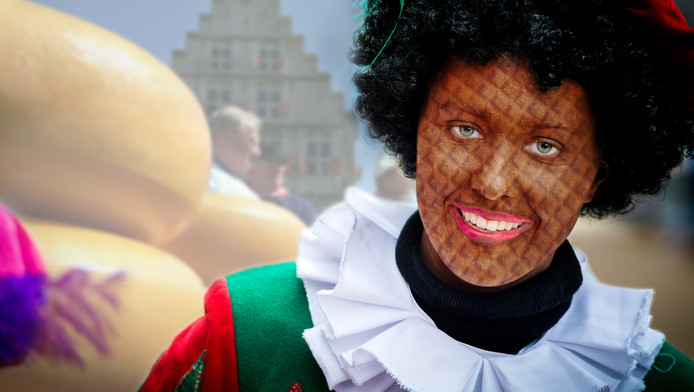 Perhaps we should find the plot…
…because clearly we have lost it. It seems to be true that a lot of these traditions originate from a real person, Saint Nicholas, who was born in the seaport town of Patara, Lycia around the year 270. He gave away his wealth to become a priest. In later life he was the Archbishop of Myra and the guardian of merchants, sailors and children. He died on Dec 6th around the year 340. However, it is thought that celebrations these days are a mishmash of earlier traditions. So perhaps the answer to the Black Piet problem is to return to these origins, because instead of the commercialism we have now, these festivals had a basis in nature, and of course the heavens! Why would I be writing this otherwise? Perhaps it would be helpful to be connected to our planet and nature once again.

Light over dark
I suspect that, like many of the festivals taking place around the end of the year, part of the Sint being white and his helpers being dark is an adaptation of earlier celebrations that occurred at mid-winter. Many traditions still honour the fact that the light is returning to us – the Sun turns around and comes back to us. The dark days are destroyed. We bring the light inside with candles and Christmas tree lights. The Jewish celebration of Hanukkah is also known as the festival of lights. Yule and Saturnalia also refer to light conquering dark. Duwali too celebrates light over dark at this time of year, Autumn. It too is based on the heavens but not mid-winter. 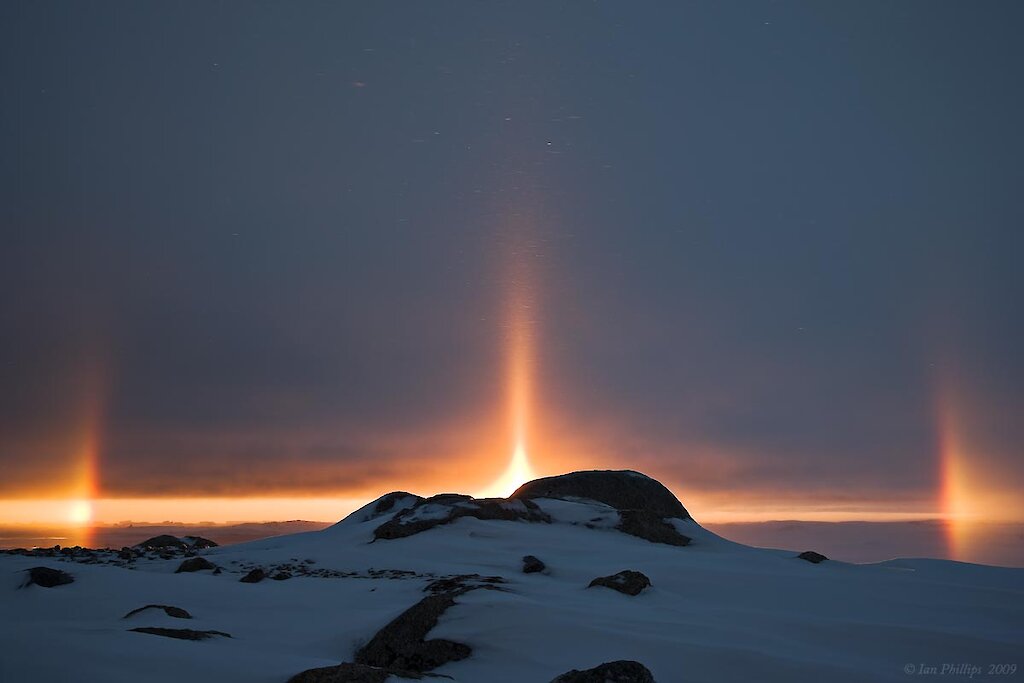 Photo of Midwinter in Antarctica by Ian Phillips on www.antarctica.gov.au

Do something different
Compromise. The word has negative connotations, as in: a compromising situation or a compromised plan. Let’s face it – no-one ever likes a compromise! Any Libra probably knows this! In my couples counselling practice, the situation has often developed into two opposing views. Sometimes the answer to this is not necessarily to compromise based on these positions, but to do something entirely different. Is it time for a totally new solution that is really old? Surely that’s tradition too! And we could certainly use a bit of light to balance all the darkness in the world today.

Another interesting explanation based on the heavens – I really like this one!

An older post that touches on this topic is Libra 2010 on negotiation.

“The body can endure compromise and the mind can be seduced by it. Only the heart protests. The heart. Carbon-based primitive in a silicon world.” Jeanette Winterson, The Powerbook